The emergence of Airbnb along with an increase in urban tourism has intensified the pressure on urban areas while adding a new dimension in the dynamics of the housing distribution especially in historic cities. These dynamics affect both local economies and alter significantly the characteristics of urban space arising the necessity to create not only policies that foster sustainable tourism development but also to advance urban models that explore the relation between Airbnb and the traditional rental and accommodation sector. Through the case of Venice, the present study sheds light on the potential evolution of Airbnb housing in comparison to the traditional rental and homeowner market. In particular, it seeks to understand whether a potential equilibrium between these uses exists and if so, at which point in regards to this equilibrium the historic center of Venice is now. To tackle this question, methods deriving from the field of game theory and specifically evolutionary game theory are used. With the agents (players) being the housing units, the designed theoretical model explores the population dynamics of the housing units in Venice given the three options of homeownership or long-term rental (residential), short term rental over Airbnb (airbnb) or no use (vacant). The findings of our theoretical population game model are validated and discussed against a dataset describing the use patterns in the city of Venice during the past 20 years. A verification of the outcome through further case studies could eventually provide insights on future behavior of tourism pressure in historic urban areas. 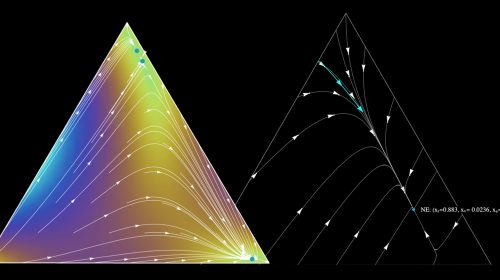 A preprint of the presented article can be found here: